Users with resource "read" permissions may view DHCP Server information, however only those with either Admin permissions or granted group-level server permissions can manage DHCP server creation, edits, and deletion.

Additional DHCP Admin tasks occur in other ProVision areas, and not all management tasks require Admin-level permissions - some only require appropriate resource permissions on the DHCP Groups, Zones, and servers involved. See additional sections on this page for more detailed information:

The DHCP Tab organizes the DHCP system into a more unified and accessible interface, combining both admin and non-admin DHCP tasks together under the DHCP tab.

DHCP pools are gathered under DHCP Groups and servers are attached to those Groups. Pools, attached servers, and failovers are managed at a per-Group level.

Users can then view and manage Groups, individual pools, failover values, attach servers, and perform pushes all on the same page.

Users with resource "read" permissions may view DHCP Server information, however only those with either Admin permissions or granted group-level server permissions can manage DNS server creation, edits, and deletion.

In order for a user to work with DHCP Groups, Pools, and servers, they must have User Group permissions for:

Creation and management of DHCP servers, as well as scheduled DHCP pushes, are Admin-only tasks.

On the DHCP Server List a shortcut permissions button ("Perms") is available, accessible only to Admin users.

This permissions button allows for direct, point-of-use permissions adjustments to DNS Servers for permission groups. It uses the same CRUD permissions and groups available in the Admin Users tab, but removes the need to remember and search for the DHCP item name.

To open the Change Resource Permissions module, click on the "Perms" Button for any DHCP server.

Edit the CRUD permissions for any ProVision user group by clicking the checkbox for the desired group and permission type. When done, click "Save Changes". 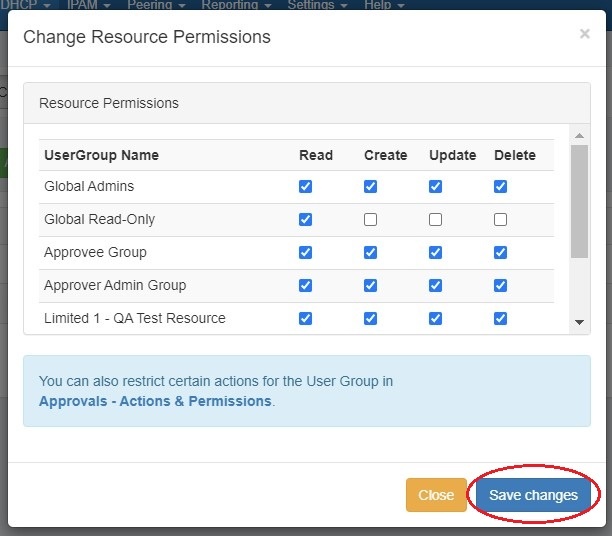 The permission changes will be also be reflected in the Admin User tab Group settings.

The Approvals module stores and queues DHCP actions made by selected User Groups, and sends those actions to a Pending Changes list for administrative review.  Later, an administrator (or combination of administrators) can approve or reject these stored actions.

Approvals is primarily set up and managed via the Admin Approvals Tab. See the Approvals Tab for details on setting up and using Approvals from the Administrative viewpoint.

In the DHCP Tab, a "Resources Awaiting Approval" module will display near the top of DHCP Groups, DHCP Servers, DHCP Pools Lists, and DHCP Pool pages, if a change has been submitted on that page that is pending approval. 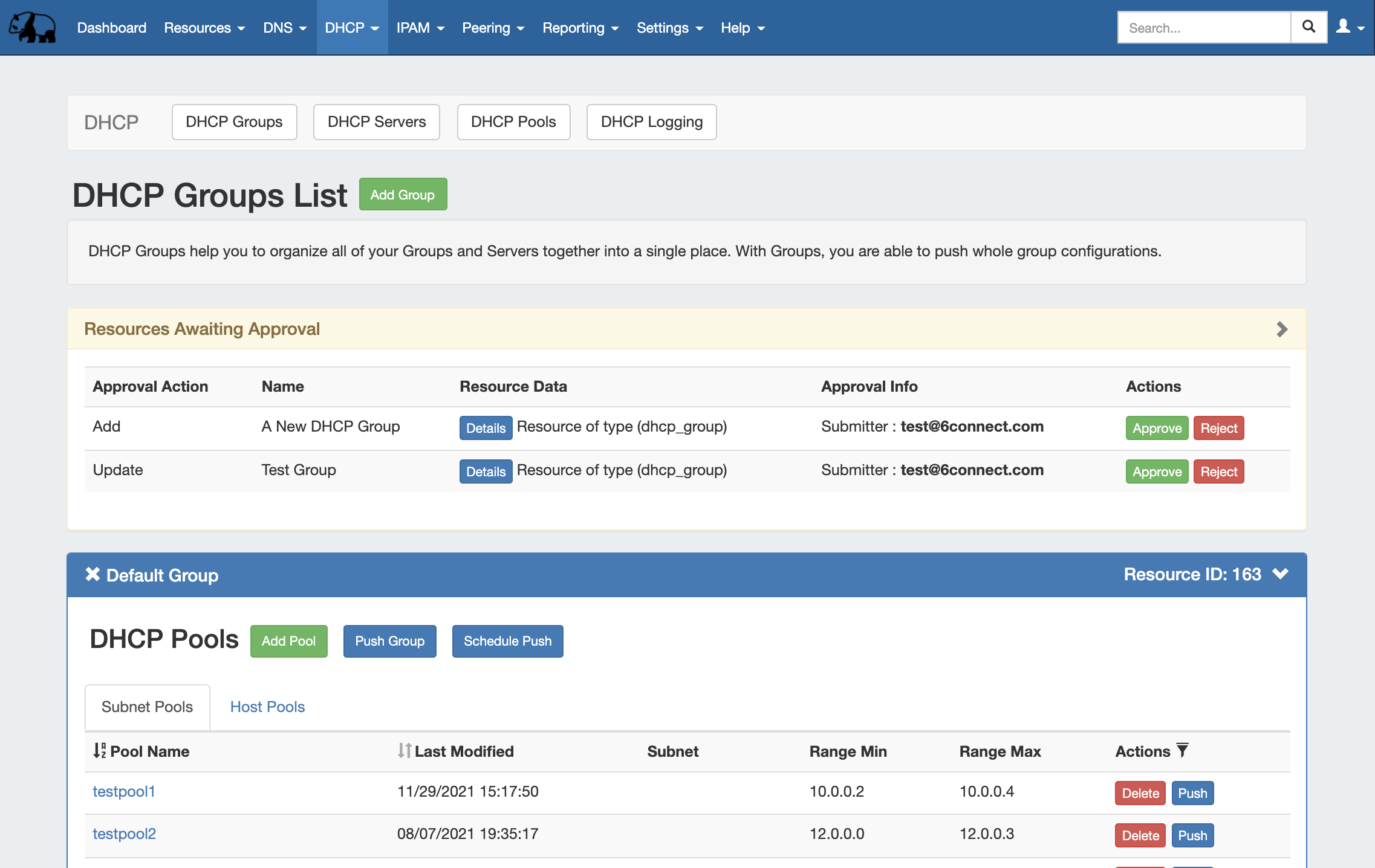 Users who submitted a change for approval will see the details of their change request in this module.

Admin users with permissions to approve or reject the request will have the option to Approve or Deny the change.

These tasks may be accessed in the following areas:

Instead, these tasks simply require that the user be included in a User Group that has appropriate permissions (either direct, or inherited) on the Parent Resources, DHCP Groups, and servers involved.

In the DHCP module, pools may be pushed manually or scheduled for a future time, and may be performed for a single pool, all pools in a DHCP Group, or a full DHCP server.

Manual DHCP pushes may be performed from the following locations in ProVision:

For details on performing pushes in the above areas, see the following sections:

Scheduled pushes may be performed from the following locations in ProVision: